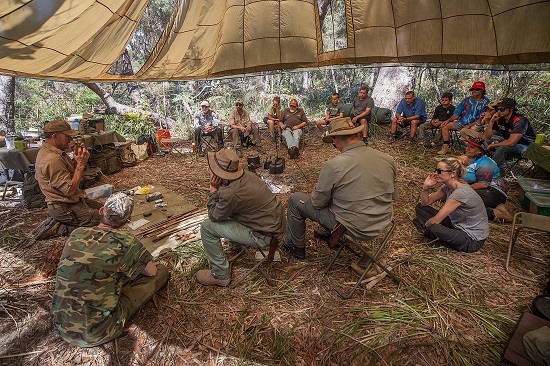 More than just skills and tips for the unprepared stay

As Australians, we love the idea of getting out into the bush and being at one with nature. But venturing out can be a dangerous pastime if you don’t know what you’re doing and are not prepared.

We never know when we may be placed in a lost or stranded situation for which we have not planned, a disaster situation without electricity or an urban crisis that takes us out of our comfort zone. Many people do not consider ‘what could go wrong’ and are, therefore, unprepared both mentally and physically for such a situation. This, in turn, can leave them poorly equipped to deal with a challenge of this type. The better prepared people are, the less affected and vulnerable they will feel, helping them to react properly and make better decisions when they need to.

Learning wilderness survival and bushcraft skills such as fire making, water procurement, building a shelter or using signalling devices, can greatly improve your chances of surviving and being rescued in the unfortunate event of something going wrong such as becoming lost or injured in a remote area or a vehicle breakdown. Learning these life skills can also greatly benefit people caught in an urban emergency or crisis which takes them out of their usual comfort zone.

In recent years, vehicle camping has become a huge thing in Australia with more people gaining access to remote areas via the use of their 4WD’s. This has been both a good and a bad thing as it has enabled more people to get out, see and enjoy more of our large beautiful country but bad in the sense that people have become too overly dependent upon the ridiculous amount of unnecessary equipment and paraphernalia that goes with it. This over dependence on equipment, coupled with a very poor knowledge of bush skills has led to a number of fatalities in our outback areas and will continue to do so, as people simply don’t know what to do once things stop working or they find themselves lost without their equipment.

This same attitude and over reliance on equipment  was the thing that led many of Australia’s early explorers to their deaths, such as the ill fated Burke and Wills expedition who took over 20 tonnes of equipment and provisions with them but had no knowledge of the land, any bush skills or any respect for traditional wisdom, thus perishing as a result! The opposite is true of John McDouall Stuart who travelled very light, only taking with him essential equipment and relying on his knowledge of the bush and respect for traditional knowledge. He was successful and probably Australia’s best explorer.​

Unfortunately, a great number of Australians only see learning survival skills as something “they have to learn just in case something goes wrong” and don’t realise that a lot of the skills learnt in survival training and it’s very different parent subject “bushcraft”, are fun and interesting in their own right and instil a deep respect for nature and the environment. Many Australians also consider themselves to be “self proclaimed experts” when it comes to bush skills, however in reality, nothing could be further from the truth with many Australians  not being able to light and maintain a fire correctly, don’t know how to make water safe to drink or don’t know how to find South using the Southern Cross!
Many Australian’s also lack the basic knowledge and skills to handle an urban emergency or crisis in which the power has gone out and supplies are low.

There are significant differences between survival, bushcraft and camping and most people don’t realise what these differences are.

Survival training is what the military teaches our soldiers, pilots and seaman in order for them to stay alive in a remote or hostile environment, long enough for them to be rescued or effect self rescue. During World War 2, there was the real threat of pilots being shot down almost anywhere in the world, so the need arose for survival manuals with universal principals that could be applied in any environment.

Survival training is designed to teach serviceman a variety of necessary skills in the shortest possible time. These skills include learning the basics of shelter building, fire making, water and food procurement, navigation, signalling and the survival priorities for different environments. Many civilian activities and extreme sports such as mountaineering, climbing, hiking, cross country skiing etc require survival type training relevant to their chosen activity to be undertaken in order to participate in that activity safely.

Survival type training is typically focused around a 72 hour emergency situation where something has gone wrong, be it a vehicle accident, plane crash, natural disaster, a war zone or someone becoming lost in the bush etc.

Survival training is primarily equipment focussed or improvising with equipment in order to get out of that particular situation and back to safety as fast as possible and in any way possible with little or no regard for nature or the environment in the process.

The word “survival” became popularised in the 80’s with the “Rambo” type movies, the do it all “survival knife” and the romantic yet misconceived idea that man needed to “fight” nature and the elements in order to survive! This has led to a spate of reality based TV shows in recent years depicting man “against” the natural world…some good, some not so good and some absolute rubbish!

These shows although popularising outdoor pursuits and sparking an interest in the “survival world” which is a positive thing, have been focused primarily on entertainment and drama in order to secure ratings, rather than on educating the public about realistic skills and best practice.

Bushcraft on the other hand focuses on maximum use of knowledge and skills with “minimal” reliance on equipment. Bushcraft is the parent skill that all survival training comes from and is far more encompassing, including a much greater variety of disciplines such as; shelter-craft, fire-craft, botany, zoology, butchery, natural navigation, bind-craft, tool making, wood carving, fishing, tracking, hunting and trapping, edible and medicinal plant knowledge, water procurement techniques and wilderness cooking to name a few.

Bushcraft draws from the knowledge and skills that traditional cultures across the world have used to survive and live comfortably in the wilderness for thousands of years.

The term bushcraft originated in the 1800’s in the new world British colonies (America, Canada, Australia, New Zealand and Africa) and evolved from the terms “colonial craft”, “bushmanship” and “woodcraft” which were used to describe the wilderness living knowledge and skills that traditional cultures had already been using for thousands of years and that the new settlers, explorers and colonists had to learn and adopt in order to travel through and survive in the new world.

Bushcraft is all about going into the bush with minimal equipment and manufacturing everything else you need from what you find around you. It requires a detailed knowledge of the plants, trees, animals and the natural world that surrounds us, thus contrasting to the absurd amount of unnecessary equipment, gadgets and lack of knowledge that modern camping has come to be. 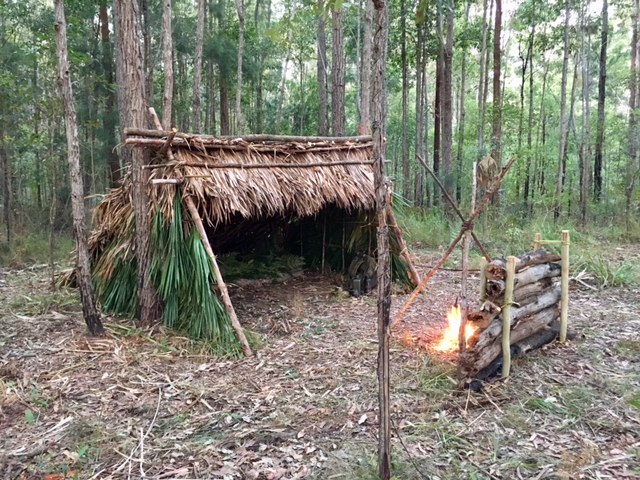 Lean-to shelter with springy bough bed made from cabbage tree palm fronds. Being able to make a shelter from what you find around you is a principal skill of bushcraft

The term Camping comes from the military heritage of campaigning, which can be traced back to the 1500’s. The Latin word Campus, “open field or space for military exercise” and the French words camp, “place where an army lodges temporarily” or champ “a field”, eventually evolved to non military activities. The rise of recreational camping and hiking in the 1960’s diverged away from the skills based Woodcraft and Bushcraft ethic of taking only minimal equipment into the wilderness such as a knife, wool blanket and tarp and producing everything else, to people taking too many modern technologies into the woods and being completely reliant upon that technology, such as modern camping stoves, tents and high tech equipment.  Aldo Leopold (1887-1948) described Woodcraft as “the working knowledge of the land” and camping as “how to work technology to live on the land”. He remarked that, “the rise of camping padded us against the bumps of nature”.

This all is not to say that someone who studies bushcraft does not take with them into the wilds modern equipment, on the contrary, technology is embraced where needed but it is not overly relied upon so that if that particular item was to be lost or stop working, the person with some bushcraft knowledge would be able to manufacture a solution from nature.

With a little skill and a cutting tool, you can make everything you need in the outdoors

The study of bushcraft is immensely rewarding and important for all of us, particularly children and the younger generation as it teaches many valuable and practical holistic life skills. It develops self-confidence, self-reliance and helps us gain an understanding of traditional culture and a deeper respect for nature and the environment which ultimately helps us to look after it! 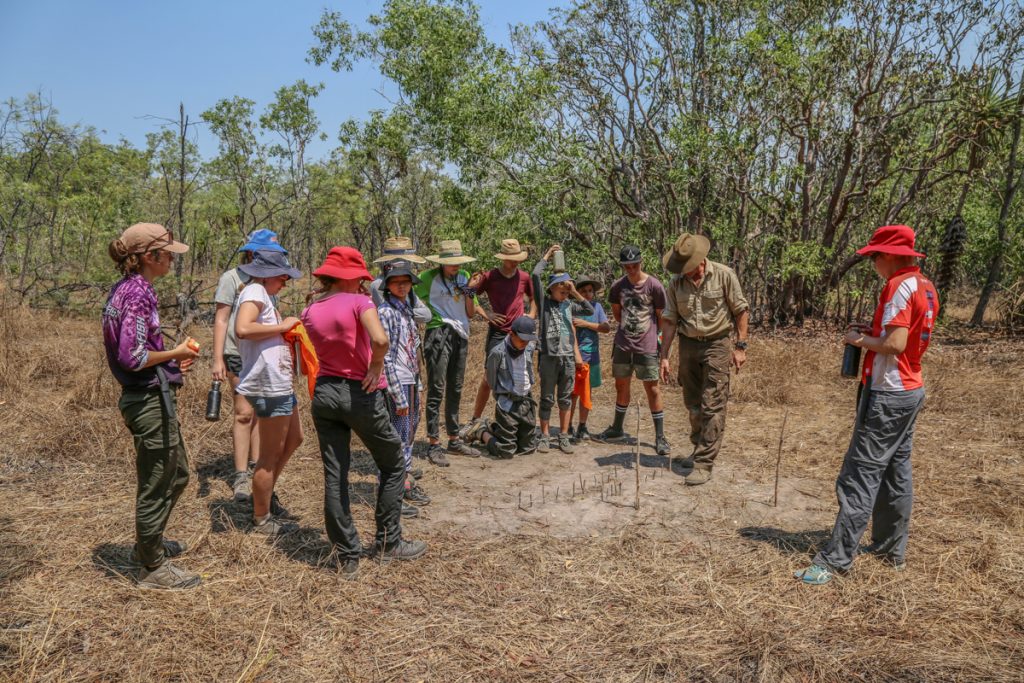 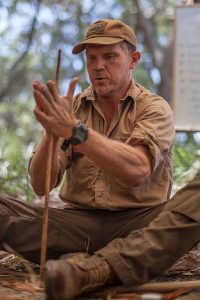 Gordon has trained at and completed numerous Survival and Bushcraft courses and certifications worldwide at schools run by Paul Kirtley, Ray Mears, Dave Canterbury, Lofty Wiseman and Bob Cooper. Gordon also works seasonally as an outdoor guide in the NT, taking clients on camping expeditions into Kakadu and Arnhemland.

12 Responses to "Bushcraft and Survival training"